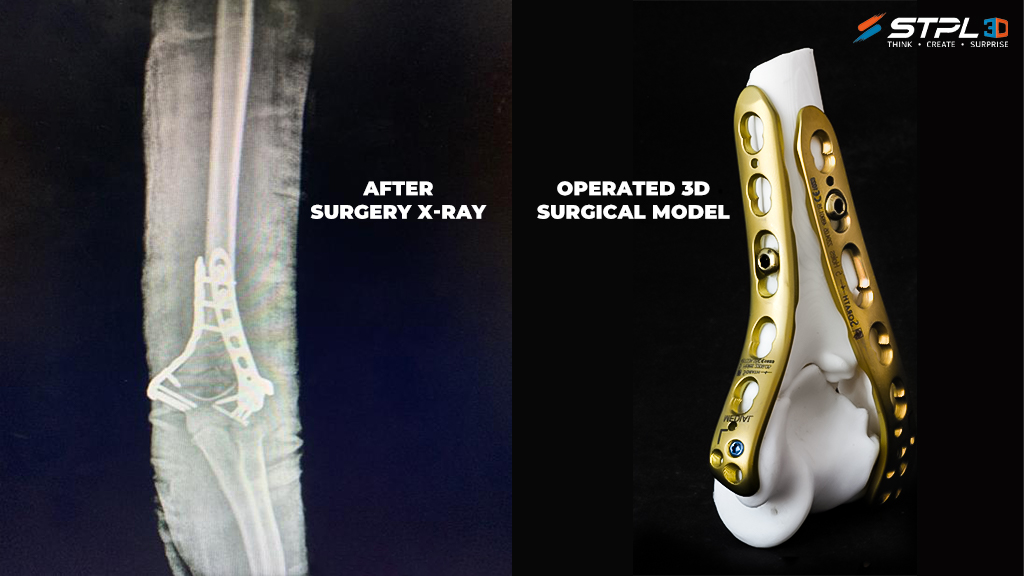 Accidents are very unfortunate. Such an unfortunate incident happened with 14 yr old, Aaska Shah on 3rd Dec 2019. She fractured her left hand’s elbow while playing. The x-ray scan shows multiple fractures which made the case quite complicated. The news of fracturing her elbow so badly left her parents devastated.

At this young age, planting a prosthetic implant would have compromised the natural movement and ability of the patient. So, the doctors were left with the only option to operate the patient and keep the bone pieces in place by clamps. After being denied by several hospitals who thought that an operation would be too difficult and dangerous, Aaska’s parents brought their daughter to the Surat’s well known Dr Jignesh Pandya. Dr Pandya and his team first reviewed x-rays and 2D scans of the patient and reviewed their surgical plan. The doctors were a little concerned because there are a frightening amount of things that can go wrong during the operation but refused to give up hope. The doctors have faced many challenges during the operation like deciding the clamp length and attaching points in the bone but the surgeries were successful largely thanks to the skilled surgeons.

These challenges inspired the doctors to look for an alternate method. Inspired by a piece of international news, Dr Pandya considered the idea of 3Dprinting organ models first and exercise with it to get more confidence during the procedure. He looked for the chances of getting a 3D model in India but put the idea away with the time constraint. When 3d expert Agam Shah from STPL3D contacted him, he instantly took interest and went ahead with the plan. STPL3D assembled a team of clinicians, imaging experts, engineers, and software designers to produce a patient-specific printed fractured elbow bone from resin to guide the surgical process. The doctors repeated the exercise with a 3D model and reported greater confidence with approx. 25% lower operation table time in the same procedure that was considered too dangerous based on the imaging technology available then. It’s amazing how fast things can change. 3D Printed organ models turn out to be a stepping-stone toward the advancing medical field. The rapid development of 3D printing has created a new learning and teaching tool for medical education. It has been challenging to recreate models with tissue characteristics similar to the human pathological specimens. This will only be possible with a firm understanding of the tissue characteristics required of the model and the capacity of the printer to blend composite materials to mimic human tissue. The type of print material which can be printed is dependent on the type of printer used. As many groups are using 3D printing technology and many more wish to enter into this expanding field, STPL3D has outdone itself with the quality and accuracy of the 3D printing parts. SME Announces Insights on AM for Investors at RAPID + TCT 2020